Obstruction of Justice Charges in Florida 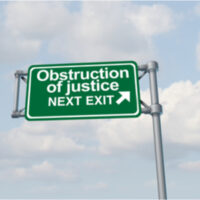 There are many different kinds of acts that you may be surprised are criminal under Florida law, since they do not involve property crimes or offenses against other individuals – at least not directly. However, there is an entire body of laws under Florida’s obstructing justice statute that criminalize a wide array of actions. In short, the offenses are unlawful because they prevent officials from doing their job or serving the public in general. If you were arrested for violating various provisions in the statute, you will probably be shocked at the harsh nature of the penalties.

Therefore, you should consult with a Florida criminal defense attorney right away if you were charged with obstruction of justice. This overview of the offenses should convince you of the reasons why legal counsel is critical.

Penalties for Obstruction of Justice Charges: Many of the offenses described under the statute are First or Second Degree Misdemeanors, which carry up to one year or 60 days in jail, respectively. The fines may range from $500 – $1,000, but a defendant may have to also pay restitution if obstruction of justice led to financial losses for a victim.

More serious counts rise to the level of felony charges. For instance:

Talk to a Florida Criminal Defense Lawyer About Your Case

If you were arrested for obstruction of justice or charged in connection with another offense, please contact Fort Lauderdale criminal attorney Kevin J. Kulik. There are defense strategies available to fight the allegations, but it is essential to get skilled legal counsel on your side right away. Our team is happy to set up a consultation at our office to review your circumstances and discuss next steps.