3 Things You Did NOT Know About Florida Assault Charges 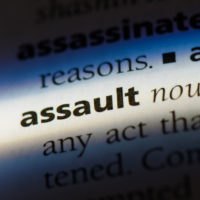 The term assault is often used interchangeably with an attack or other violent offense, but Florida’s criminal statutes include very specific definitions when it comes to charging someone with a crime. To further complicate things, state laws refer to battery both as a distinct offense and an associated crime depending on the circumstances. When added to aggravating circumstances and enhancements, you might not know what legal concepts apply – let alone how to fight the charges if you have been arrested.

Considering these complexities, it is smart to retain a Fort Lauderdale assault attorney for assistance if you are facing charges. Meanwhile, you can review a few lesser known facts about these offenses.

You must carefully review the statutory definitions to understand how this is possible:

Based upon these definitions, you can see that it is possible to assault someone without being charged for battery if you did not come into contact with the victim. You could also face battery charges for intentionally striking someone who did not know the touching was imminent. If you first make the threat, followed by the intentional contact, assault and battery charges may BOTH apply.

In general, adding “aggravated” to the terminology means the offense is more serious with harsher penalties. For aggravated assault, the prosecutor must prove intent to kill with a weapon or intent to commit a felony. Aggravated battery requires evidence of a battery, plus facts indicating that the offender:

Aggravated assault is a Third Degree Felony, so you face up to five years for a conviction. It is Second Degree Felony to commit aggravated battery, which could mean a maximum prison term of 15 years.

This information may expand your horizons about Florida assault and battery charges, but keep in mind that there are many additional details involved with a real-life case. You put your rights at risk by attempting to represent yourself, so please contact attorney Kevin J. Kulik to discuss strategy. We can set up a consultation to review your circumstances at our offices in Fort Lauderdale, FL.