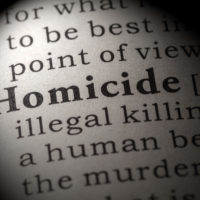 When it seems like bad news abounds in the media headlines, it’s refreshing to read a report that announces some good news. According to a June 25, 2019 article published by Fox News Channel 13, Florida’s crime rate dipped in 2018 – for the 48th year in a row. In sum, the overall crime rate was down 9 percent and violent crime decreased more than 4 percent. The indexed crimes used to measure the crime rate include rape, robbery, aggravated assault, burglary, larceny, and motor vehicle theft. Unfortunately, the glaring exception to this trend is the most violent crime under state law: Various forms of murder.

In response to the 2018 crime report, you can be sure law enforcement will step up its efforts to reduce murder crimes for 2019. If you’ve been charged, it’s critical to consult with a skilled Florida homicide defense lawyer right away regarding your defense options. Some important background information may also be useful.

Classifications of Homicide Crimes in Florida: These offenses always involve the death of another person, but there are two categories of homicide crimes:

The distinction between the two is whether the offense was committed with malice, i.e., the intent to kill the victim OR killing the person out of hatred or spite. In such a case, the charges will be some degree of murder. Manslaughter is the killing of a person through intentional or reckless negligence.

Degrees of Murder: There are three levels of murder charges:

The penalties for a conviction on First Degree Murder charges may include the death penalty or life in prison without parole. For the lesser grades, the minimum prison sentence could be up to 15 years.

Both versions of manslaughter are Second Degree Felonies in Florida, punishable by a minimum of 9 and up to 15 years in prison. Factors that may lead to a longer term of incarceration include use of a weapon or commission of the crime upon a child.

Set Up a Consultation with an Experienced Florida Homicide Defense Attorney

Every one of these different types of murder charges carries significant penalties, potentially up to life in prison or the death penalty. When the stakes are high, knowledgeable representation is essential, so please contact Fort Lauderdale homicide attorney Kevin J. Kulik right away. We can schedule a consultation to discuss your circumstances and get started on a defense strategy.