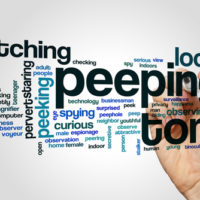 Palm Bay Police Department made an arrest in a Peeping Tom case on December 12, 2017, after two children complained that a man was videotaping them in a drug store bathroom. Florida Today reported that the 20-year-old perpetrator was already in the restroom at the Walgreens on Babcock Street when the brother and sister entered, with his cell phone camera in hand; he began recording them through a space in the bathroom stall. The children had been given permission to use the bathroom by their mother, who was busy at the photo department at the time. The pair immediately ran to a clerk for help, but the man left before police were able to apprehend him. Through the assistance of surveillance video, officials made a positive identification and arrested him just three days later. The accused was charged with video voyeurism, which is one of many types of sex crimes in Florida. In addition, the offense is enhanced due to the fact that children were involved.

If you secretly observe a person in an intimate state, typically for some type of sexual gratification, you may be charged with voyeurism; video voyeurism charges may apply if you use a recording device to view or capture images of another individual:

Are Voyeurism Charges Different When the Subject is a Child?

Yes, both classifications of voyeurism carry enhanced penalties when children are involved. As with many types of sex offenses in Florida, the age of both the child and offender are important. Enhancements apply when:

If you are convicted of this crime:

Also, unlike other crimes in Florida, a conviction for video voyeurism will remain on your criminal record permanently. You are ineligible for record sealing or expungement.

Video Voyeurism involving a child is a Second Degree Felony, but the enhancements mean harsher sentencing because of Florida’s severity ranking of crimes. In addition to the jail time and fines that are allowed by law, a judge must designate you as a sex offender.

Trust a Skilled Florida Criminal Defense Lawyer with Your Case

If you are facing any type of voyeurism charges in Florida, please contact attorney Kevin J. Kulik to discuss your defense options. We can schedule a confidential consultation for you at our Fort Lauderdale office.