Restitution in Florida: Penalties Beyond Fines and Jail Time 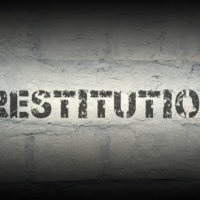 If you’ve been convicted for a crime, you probably expect jail time, fines, probation, and other penalties – depending on the nature of the crime. One aspect of criminal punishment may come as a surprise to you, however. A judge could order you to restitution under Florida law, which is available for many different types of offenses. It could hit you in the wallet far beyond the amount of a fine, so it’s important to learn more about restitution from a Fort Lauderdale criminal lawyer.

In theory, restitution is a way to put victims back in the same position they would be had you not committed the crime. Of course, this isn’t always possible in practice, but the statute will aim for this goal regardless. The statute states that a court can order restitution for damages caused to the victim or which stem from criminal activity, either directly or indirectly. Based upon the language, that means you could be ordered to pay:

Plus, the statute also allows the court to charge interest on restitution, which may accrue from the time of the order through to the date that you meet the terms imposed by the judge. Restitution can even be a condition of your probation, leading to serious consequences for a violation of probation. If you don’t pay up within the time allowed by the court, the victim may be able to get a lien on your home, car, and other property.

Restitution for Different Types of Crimes

A court can order restitution in almost any type of criminal matter, but the most common would be theft crimes or fraud offenses. You’ll have to reimburse the victim for the value of the property or funds, plus interest. Still, you can see from the above examples that you may also be forced to pay restitution if convicted of:

Beyond restitution for a conviction in a criminal case, there may be additional financial consequences. The victim could sue in court for civil damages, which are completely separate from amounts a criminal court may order. For instance, you may be liable for civil damages if your acts caused pain, suffering, and other damages for the victim.

You Can Trust a Skilled Florida Criminal Defense Lawyer

For more information on restitution, please contact attorney Kevin J. Kulik to schedule a consultation at our Fort Lauderdale office. We can discuss strategies to defend the charges after reviewing your case.