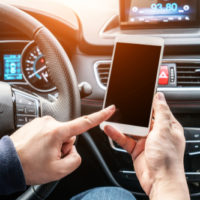 Smart phone theft occurs quite often, but it’s been in the Florida news on two notable instances recently. In March, the Miami Herald ran a story about mixed martial arts celebrity Conor McGregor stealing a smashing the phone of a fan who was trying to get a picture. A few weeks later, the Tampa Bay Times reported that an 18-year-old individual with autism stole a phone he saw sitting on the countertop at a fast food restaurant.

It may come as a surprise to some that both men were arrested on felony charges, which carry harsh penalties for a conviction. A Fort Lauderdale theft lawyer can tell you more about how and why this offense is a felony, but an overview may help.

Florida Felony Classifications for Theft Crimes: There are two categories of theft offenses under state law, which are based upon the value of the property stolen:

Considering that most advanced smart phones cost more than $300, it’s highly likely that you’ll face Third Degree Grand Theft charges. This value for a felony is quite low as compared to other US states – in fact, Florida has the second-lowest threshold for felony offense, and it’s been that way for decades. There are no signs that lawmakers intend to change that value.

Penalties for Theft Offenses: For Petit Theft, you could face six months to one year in jail or on probation, depending on whether the charge is First or Second Degree. There are also fines ranging from $500-$1,000.

As a felony, Third Degree Grand Theft is assigned a Level 2-4 under Florida’s offense severity ranking system. For a conviction, you could face:

Other Consequences: In addition to jail time and fines, there may be implications for your driving privileges if you’re convicted of certain theft crimes. Your license could be suspended up to six months for a first time offense, and up to a year for subsequent convictions. Plus, you could have a felony conviction on your criminal record for Grand Theft charges.

Rely on a Florida Criminal Defense Lawyer for Legal Help

Smart phone theft may not seem like a serious matter, but there are implications that you may not have considered. For more information on defenses to the charges, please contact Fort Lauderdale attorney Kevin J. Kulik. We can set up a confidential consultation to discuss your options.