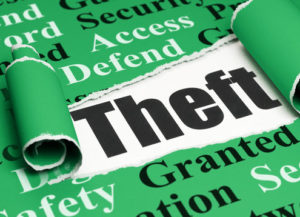 The story sounds like something out of a comedy: A man was busted with a theft crime as he was riding his bicycle in a Florida neighborhood. The item in question was a milk crate he had attached to his bike for carrying groceries and other shopping purchases. The man claimed he found the crate, bearing the name Sunshine State Dairy Farms, on the side of the road. Polk County’s WFLA News Channel 8 reported the offense as possession of stolen property, considered a theft crime in the state. There are several other offenses that fall under the umbrella of theft crimes in Florida, depending on the circumstances. A criminal defense attorney can tell you how these different laws might apply in your case if you’re facing similar charges.

The legal term “theft” refers to a number of crimes involving an unauthorized taking of property. Larceny, misappropriate, conversion, burglary, robbery, and other offenses are included under the umbrella of theft. A prosecutor must prove certain facts in order to obtain a conviction for a theft crime:

In Florida, the law makes a distinction between petit and grand theft, based upon the value and type of the property.

A theft may be elevated to a grand theft as a third or second degree felony under some circumstances.

These types of theft carry a criminal penalty up to 30 years in prison and a maximum fine of $10,000.

Besides the criminal penalties of jail time and fines, your driver’s license may be suspended if you’re convicted of a theft crime in Florida. Your chances of a theft offense impacted your driving privileges increases if you have a prior criminal history. The suspension can be anywhere between six months to a year. In addition, your civil penalty may include compensating the victim for the damage caused.

If you have been charged with any of the theft crimes defined under Florida law, it’s critical to retain a qualified criminal defense attorney to represent you in the proceedings. You could be facing severe criminal and civil penalties unless you have a knowledgeable lawyer to protect your rights. A lawyer with experience in criminal matters can help you work through the complex court process to get the best possible outcome. Please contact Fort Lauderdale criminal defense lawyer Kevin J. Kulik today to schedule a consultation or with questions about your case.