Your Rights in a Stop and Frisk by Florida Police 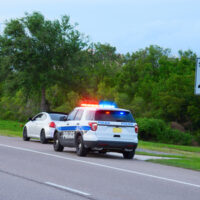 When you’re strolling down Las Olas Boulevard, the River Front, and other busy streets around Fort Lauderdale, you probably don’t expect to be stopped by police – until it happens to you. One minute you’re minding your own business, and the next you’re subjected to questioning and a pat down of your person. The scenario is called a “stop and frisk,” and it occurs more often than you think. Officers seeking to apprehend others involved in criminal activity may detain you, possibly uncovering evidence of a crime and putting you under arrest.

Stop and frisk situations trigger multiple constitutional issues, at both the state and federal level. As such, it’s important to work with a Florida criminal defense attorney if you believe unlawful acts by police led to your arrest. Some background information may also help.

Legal Basis for Stop and Frisk Actions: The primary constitutional issue with these brief stops is that they trigger Fourth Amendment protections against unlawful search and seizure by police. Through case precedent the US Supreme Court has developed a test regarding whether a stop and frisk violates the detainee’s civil rights: Law enforcement must have a reasonable suspicion that a crime:

In addition, if officers suspect that a weapon is involved with the criminal activity, they may frisk the person through a quick pat-down of outer clothing.

Proper Scope of a Stop and Frisk: The Supreme Court further developed the stop and frisk concept by defining the permissible scope of the search. Police can only detain an individual for as long as it takes to address the criminal issue for which the stop was made. If officers continue, prolong, or engage in a more thorough investigation than is necessary, the stop and frisk may be a violation of the Fourth Amendment.

The Effect of Evidence in an Unlawful Stop and Frisk: The constitutionality of the search doesn’t end the inquiry into stop and frisk issues. Another key point is what happens to evidence that was recovered when police engaged in unlawful search and seizure. The information may not be admissible in court, which means the prosecutor has little to go on to prove the criminal charges. Courts balance a three-part test on the matter, so evidence will likely be admitted if:

Discuss Your Rights with a Florida Criminal Defense Attorney

While this overview may be helpful, it’s important to understand that it’s just a summary of the key legal issues in a stop and frisk. You’ll still need an experienced lawyer to represent you and get illegally obtained evidence tossed out of court. To learn more about your rights, please contact Fort Lauderdale criminal attorney Kevin J. Kulik. We can set up a free consultation to review your circumstances and prepare a defense strategy.