4 Traffic Violations That Could Lead To Felony Charges In Florida 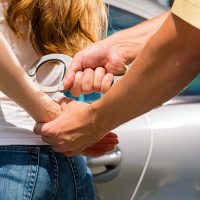 Like other US states and the federal government, Florida criminal laws classify offenses into felonies and misdemeanors, the former being the more serious crimes. There are many forms of criminal activity that fall into the category of felony, including almost all violent crimes, drug offenses, fraud, theft and burglary, and many others that you would expect. What you may not realize is that certain vehicle-related offenses can rise to the level of a felony. It can come as a shock to learn that you police are not just going to issue a traffic ticket: You are being arrested for a crime that is punishable by more than a year in prison if you are convicted.

As a result, it is critical to retain an experienced Fort Lauderdale traffic violation lawyer if you are facing charges for any of these crimes that are charged as felonies:

It is a civil infraction to operate a motorized vehicle while your driving privileges have been suspended or revoked. However, the offense is a Third Degree Felony if you are arrested a third time for breaking the law when the underlying reason for the suspension was a DUI, refusal to blow, or others. If convicted, you face up to 5 years in prison.

Failure to pull over when ordered by law enforcement is also a Third Degree Felony, but it can be elevated to a Second Degree Felony if:

For a conviction on Second Degree Felony charges, you face up to 15 years in prison.

Motorists have a legal obligation to exchange contact, registration, insurance, and other information when involved in a crash. Failure to do so is a “hit and run,” which is a misdemeanor when the offender only causes property damage. Leaving the scene is a Second or Third Degree Felony when the accident causes injuries, but it is a First Degree Felony when the crash causes a fatality.

If convicted on First Degree Felony charges, mandatory minimum sentencing applies. The judge must order four years in prison, but could issue a maximum sentence of 30 years’ incarceration.

Operating a vehicle in a way that demonstrates willful, wanton disregarding for the safety of others is a crime – regardless of whether the accused causes an accident. Reckless driving is usually a misdemeanor, but it becomes a Third Degree Felony when you are involved in a collision that leads to serious bodily injury.

Get More Information from a South Florida Traffic Violation Attorney

If you were arrested for any of these vehicle-related crimes that are treated as felonies in Florida, it is critical to reach out to an experienced defense lawyer right away. Though the case may seem like a minor traffic violation, the penalties are far more severe. To learn more about options for fighting the charges, please contact attorney Kevin J. Kulik. We can schedule a consultation at our Fort Lauderdale office to discuss the details.